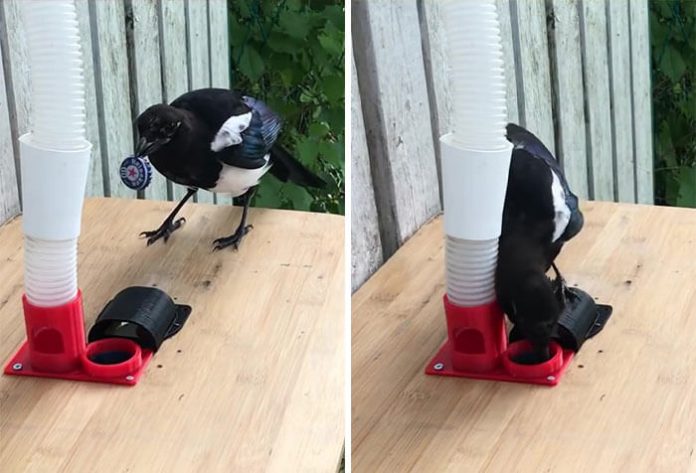 It’s amazing to see animals learn some useful tricks. For example, a trained dog that can bring you a beer from the fridge is impressive too, but in today’s amazing world, you need to start thinking even bigger. An amazing man comes up with an amazing idea. He built a bird feeder that accepts bottle caps for food. Hans Forsberg works with robotics on industrial applications for artificial intelligence. He came up with an idea to put wild birds living in his backyard to good use.

Hans has a garden where lives a pair of magpies who have been there for quite some time now. One day, Hans saw how the curious small birdies started intriguing with the complicated locks on his outdoor lamps. And then an idea had born. 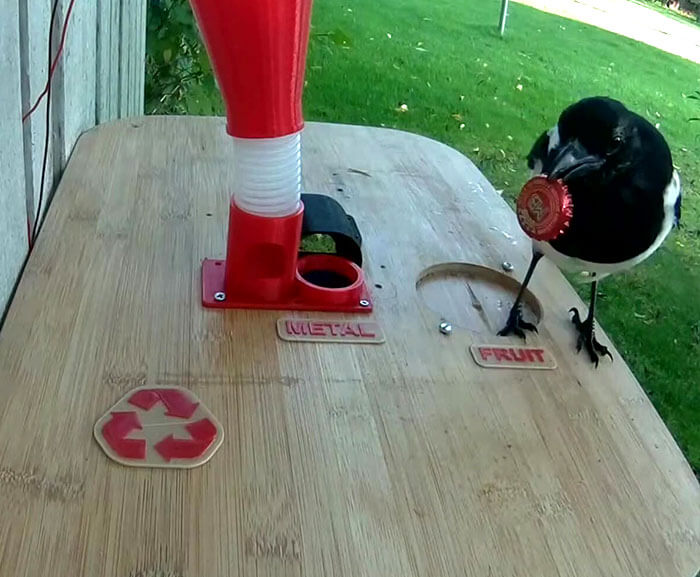 The magpies were searching for paraffin candles inside the lanterns. But Hans concluded that these birds could quite possibly accomplish more significant tasks. 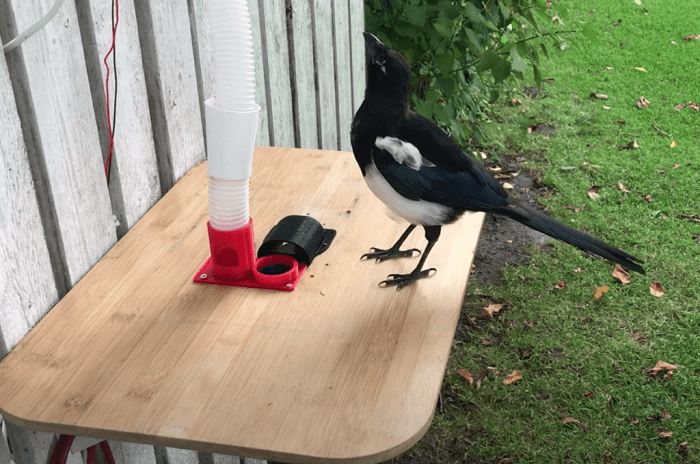 So, he chose to make a device with the help of which he would teach the birds to gather litter around his backyard in trade for food. The idea was insane as well as brand new for him because it seemed that nobody else had tried to do anything like this before as there were no how-tos on the internet, so it was all up to him to put these birdies into the service of mankind. 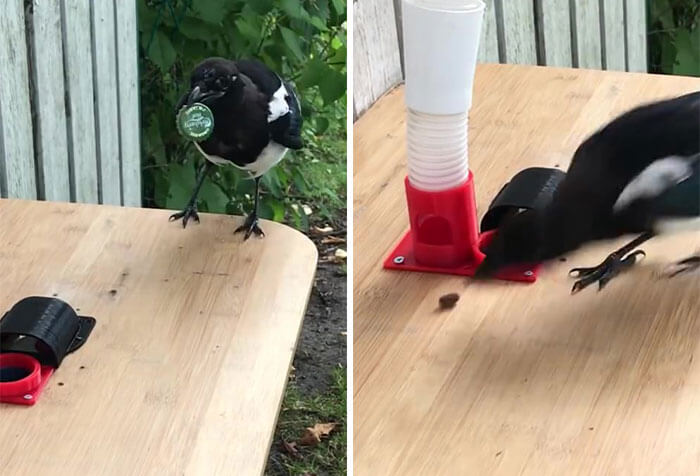 Computer scientist Hans Forsberg developed a machine that offers food in exchange for bottle caps. Whenever a magpie drops a bottle cap into the assigned slot, the birds get a reward from the machine. 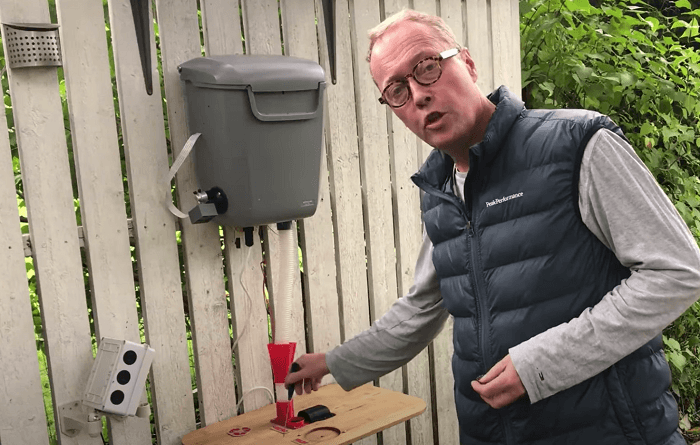 The unusual scheme itself involved various key components and processes. First, there’s the container, which is filled up with food, like peanuts and animal kibble. Whenever a piece of metal—in this example, a bottle cap—is inserted into a wastebasket, it delivers out one or two pieces of fruit. 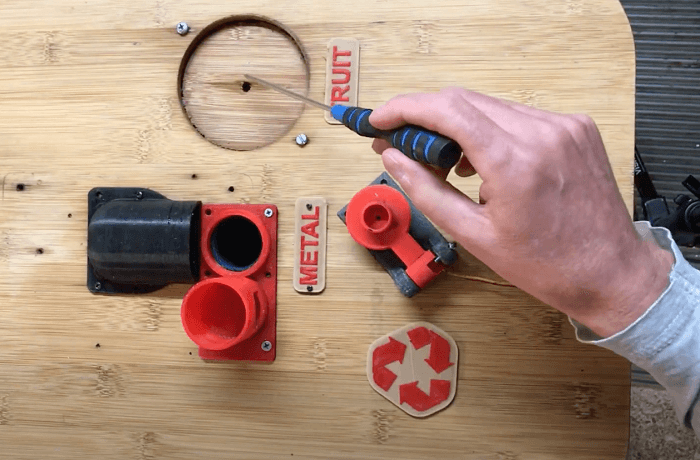 Once a contribution is invested, the food is distributed and falls down through a pipe and a duct that’s attached to a base with a small chamber where the bird can retrieve it. 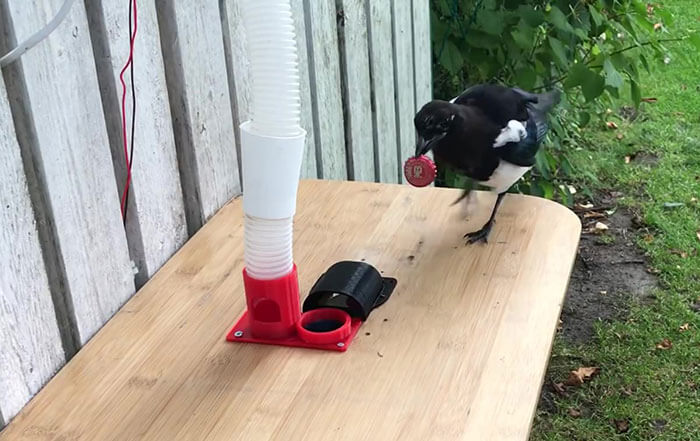 The central case comprises a Raspberry Pi system with a camera to observe everything and there are also microelectronics and sensors attached up below the table that the device rests on to process and trigger the distribution of food.

Over various years, he trained the community magpies to reuse bottle caps scattered around the area. 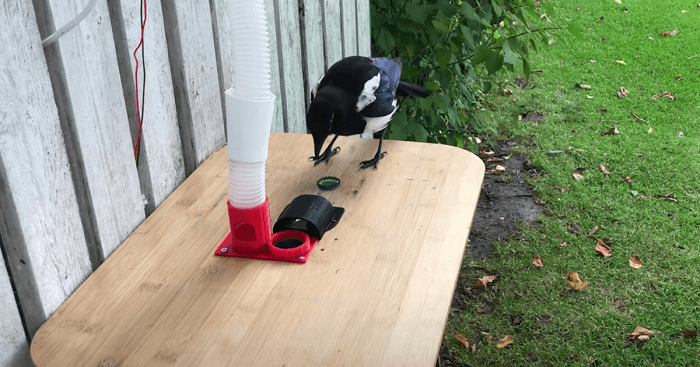 The scheme is actually much more difficult than what is said here as it also requires vibrating motors, many very distinct moving parts in the container, and even its own graphic user interface to carry out the process and status of the bird box. If you want to learn more about this project, you can read Hans’s story on Hackster. 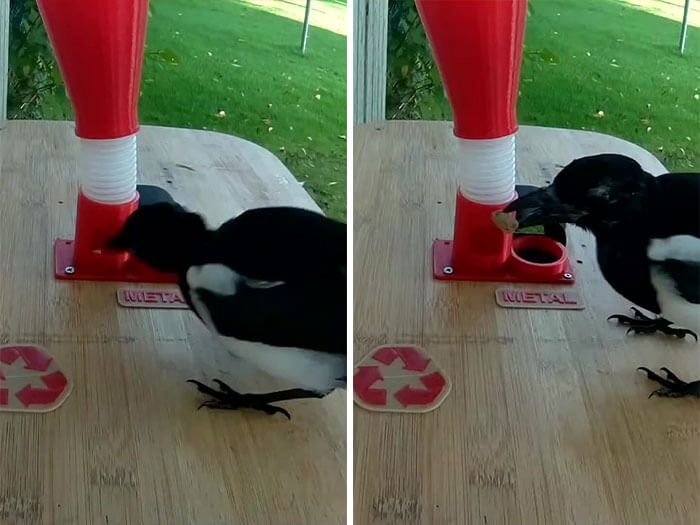 It reveals that this scheme has been in service for many years as it’s not that simple to teach magpies to pick up litter. Hans told that he first had to get the birds pleased with the feeder, to serve them daily, and to convince them to visit him regularly.

However, in the future, he is confident to teach them to pick up other sorts of waste, like cigarette stubs.